In case you weren’t plugged into the storm of chaos that erupted over the past few weeks in Australian politics, let us catch you up on what you need to be across.

If you’ve ever caught yourself wondering “who is the Prime Minister again?”, that’s no surprise. Australia has quickly become a world record holder for the most coups (an overthrow of leadership/government) in the last decade. Since Kevin ‘07 (the catchy campaign name of twice former Prime Minister Kevin Rudd), we have had six prime ministers in total. We have not had a single prime minister serve their full term since. That’s over a decade of unstable leadership. 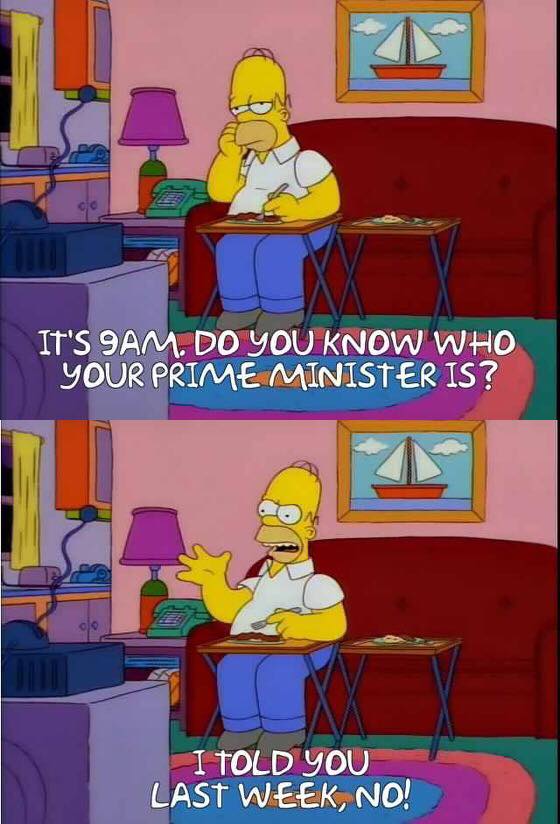 Usually in Australia, a government is voted in (with a leader elected by the party) and that leader will serve as prime minister until the next election, where sometimes they will win again and serve another standard term.

In Australia’s history, leadership (mostly) has followed a pretty standard pattern of full terms followed by federal elections. But we have had a very unusual (some would say unstable and chaotic) run of leadership in Australia since 2007. And just two weeks ago, Peter Dutton thought he’d do a better job than old mate Malcolm Turnbull, and decided to challenge him for the job. But he failed and instead someone else ended up becoming the Prime Minister — Scott Morrison.

But how does this happen?

Well, unlike the United States, where you are voting for a person (think Donald Trump, Hillary Clinton or Kanye West 2020), in Australia, we vote for a party — like a group of people that share similar political views. That party decides who their leader is. But they also hold the power to change their leader at any time if they have enough votes within the party — this is supposed to be reserved for situations where the party believe the leader can’t do their job anymore. 2007: Kevin Rudd was voted leader of the Labor Party and when they won the election in 2007 against the Liberals, he became prime minister – normal.

2010: In 2010 the Labor Party had an internal breakdown and decided Kevin Rudd wasn’t right for the job anymore. That’s when we got our first ever female prime minister, Julia Gillard – this backflip on leadership had only ever been attempted a couple of times before in the 1980s and 1990s under the Labor Party.

2013: Julia served for 3 years, until the Labor party again started fighting among themselves, and decided Kevin Rudd should take his old job back. Never before in Australia had they replaced a prime minister with an ex-prime minister who was kicked out of the job.

In the same year, the Australian people felt distrustful of Labor’s ability to hold a stable government, which led to the Liberals winning the federal election and Tony Abbott becoming the Prime Minister.

2015: Tony fell down when the Liberal party started worrying about his cred as a leader. Cue another internal struggle, and Tony was voted out by his own party and replaced by Malcolm Turnbull who up until two weeks ago was the Prime Minister.

2018:  For months, the Liberal party has been rife with dispute about who should jump in the hot seat and replace Malcolm Turnbull. Three candidates were set to compete — Julie Bishop, Scott Morrison (known as ScoMo) and Peter Dutton — for the majority vote from the party. Bishop was quickly knocked out of the game, Dutton was pinned as the front runner, but at the last minute, ScoMo snagged the win and is now Australia’s Prime Minister.

Phew. What a whirlwind. And it means that no young Australian under 30 years old has ever voted for a prime minister that has stayed in power for their full term. But how the heck are we all feeling about this medley of backflips and backstabbing?

We asked three young people for their thoughts on the current state of Australian politics:

“It’s seems like its bad that we keep getting a new prime minister, especially when they should be around for four years. I feel like there’s something going wrong and they’re not doing their jobs properly… I’m definitely worried because a lot of prime ministers say they are going to do a lot of work for the country to get into the job, but they never seem to end up doing it. I think we need politicians to keep their promises, and we need to do more good and help those less fortunate.”

“It’s a mess. It feels like our politicians are more focused on having their time in the sun as prime ministers rather than creating change and contributing to our society. I feel if you were really dedicated to governing Australia, you wouldn’t change prime ministers six times in 11 years, and that it seems politicians are in it more for personal gains rather than Australian values. It’s all really disappointing. Maybe in 5-10 years after less spills, and after seeing more longevity and success in government, we might heal from this all and restore the trust we need.”

“I don’t really engage with it. It feels like they’re playing game of thrones with each other: less getting stuff done and more personality politics. But, I feel really hopeful. I can’t wait for my generation to take over from these old and outdated politicians. Right now it feels like we’re living in the past of how life used to be for these older politicians. But when this younger generation takes over, I think we will really spark change and we will bring different values and lifestyles with us.“

In a messy political climate, you might be wondering how you can get involved and start to tidy things up. The good news is, there are many ways to get involved in our political system as a young person. The first step is to enrol. Which you can find out more about on the Australian Electoral Commission (AEC) website. You can also get in touch with your local Youth Affairs Council or Network (VIC, SA, NT, WA, QLD, NSW, ACT, TAS)  which are state and territory-based organisations that provide heaps of opportunities to get involved in your local government and community.

Another great way to equip yourself in a changing world is to follow the news, join forums, and take a look at new ways to engage with politics. For example, you might want to check out apps like NewVote, which is a platform for issues based online voting. Hey, you might even want to run for local government and work your way up the ladder! There are plenty of ways we can all start to have an impact and make our voices heard.

How Young Is Too Young To Have A Say On Political Issues?

Coming Out Is Hard. The Postal Vote Makes It Nearly Impossible.