To my mind, there’s been no bigger display of the power of young people than the campaign Emma González & her classmates are leading for gun control in the United States.

Up until February 14th, 2018, she was a regular student at Majory Stoneman Douglas High School in Parkland, Florida. On that day, 17 of her classmates were shot dead. Emma is now the face of the gun control movement in America. She’s 18 years old.

Three days after the shooting, in the midst of a media frenzy around the tragedy,  she called bull sh*t on policy makers, politicians, and the NRA in an 11 minute speech that soon after erupted online.

‘We Call BS’ – Emma’s original speech that has since driven the conversation on gun control.

But this activist spirit isn’t new for Emma. She’s been the president of her school’s Gay-Straight Alliance for three years. When discussing what drives her to be a spokesperson against violence, she’s stated “if I wasn’t so open about who I was, I never would’ve been able to do this.”

Emma’s involvement in the gun control movement has prompted her classmates to join the cause, who recently starred alongside her on the cover of Time magazine in an effort to rally students across the US to join them in the March For Our Lives protest. 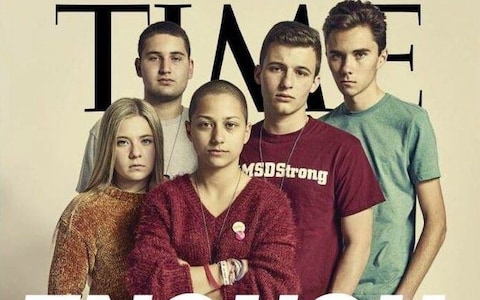 March For Our Lives has is now the largest student-led protest in American history. During the march, Emma delivered a speech – where she stood silent for the majority – that lasted exactly six minutes and 20 seconds; the same length of time the gunman firing at her fellow students at her high school.

All the buzz around Emma hasn’t just contributed to the conversation around violence and gun control, she’s changed how people perceive young people. A whole generation is now seen as the driving voice to put a stop to school shootings. And they’re backed by Lady Gaga and Obama.

Today and every day, listen to young people. #MarchForOurLives #guncontrol. Follow @ChnlKindness for more reports from the March today and for youth stories every day after. https://t.co/UdfKGp5xS3

Michelle and I are so inspired by all the young people who made today’s marches happen. Keep at it. You’re leading us forward. Nothing can stand in the way of millions of voices calling for change.

While she’s one of the best examples of young people stepping up and demanding action right now, she’s not the only one. In Australia last year, young people played a pivotal role during the Marriage Equality plebiscite. They led the charge and encouraged their peers to enroll to vote with an extra 98,000 young Australians getting on the electoral roll and tipping the balance for marriage equality to win.

All the fab things that are being said about Emma Gonzalez hold true for another young legend, Sally Rugg, who was a key leader in the youth vote for marriage equality campaign.

I guess what I’m saying is – seeing all these heroic young people brings a tear of pure joy to my eye and fills my soul with hope. I couldn’t be any bloody happier about it.

4 Secrets Every Teen Keeps From Their Parents